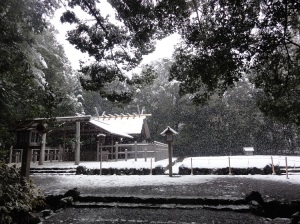 The recognition that Geku（外宮） of Ise Grand Shrine（伊勢神宮） is the only holy place connected to Amenominakanushinokami（天之御中主神）, which is regarded as the highest god in Shitoism, brought about formation of Ise Shinto（伊勢神道）around the Kamakura Period. The name Amenominakanushinokami has a meaning of a central deity sitting in the center of the universe, and is said to be a deity of origin of the universe or the universe itself. The way it appears on earth is Kunitokotachi Ohkami（国常立太神）.

A shintoist who represents Ise Shinto is Mr. Nobuyoshi Deguchi（出口延佳）,who was Gonnegi（権禰宜）, a general clerical worker, of Geku of Ise Grand Shrine. According to my spiritual reading, one of his offspring is the aunt of Ms.Nao Deguchi（出口ナオ）, who is a family member of the Diguchis in Ayabe（綾部）, Kyoto（京都） and the founder of Oomoto Kyo（大本教）.

The reason for Ms. Nao Deguchi’s divine possession seems to be that there was karma in the name of Deguchi. It was a dragon god（龍神）, which is a Kenzoku, an errand of God, of a personal god(a violent god like a human)called Kunitokotachinomikoto（国常立尊）, who is a low-ranked part of Kunitokotachi Ohkami, that obsessed her.The dragon god is a kind of pet of gods and it heard a talk among gods. The color of the dragon god was gold. I feel it conveyed a look of the World of Gods in its own way.

When Mr.Onizaburou Deguchi（出口王仁三郎）, who was a son-in-law of Ms. Nao Deguchi, succeeded her, the spiritual being behind him changed to a black dragon god and Tengu, something like a long-nosed goblin. I think truth and falsehood began to be mixed in his saying at that time. With the World of the Dead having a strong influence on those days, it couldn’t have been helped.

Age has been changing from the age of darkness to that of the daytime at present. The direct communication with God without an agent of a spiritual pet will happen to humans before we know it due to the practice of holding memorial services for ancestors and the worship of holy spirits. This is the natural state of Kannagara（カンナガラ）, or being always with God.

Talking of Kannagara, I have eaten dried kelp when I’m a little bit hungry these days. I keep it in my business car,too. It is hard, dried kelp for making stock. It is usually too salty, so I buy kelp I can eat as it is with fine appearance, not so white because of salt, at a supermarket. Even a small amount of kelp, easy to expand, makes me full. At first, I worried about stress to my stomach because kelp was hard. But my stomach turns out to be in good condition due to a Fucoidan effect, I think. It is also good for ejestion of radioactivity in nature. Somehow I felt I wanted to have it in advance. This also might be a kind of Kannagara, mightn’t it? （Note: This post was originally written on August, 12, 2007）