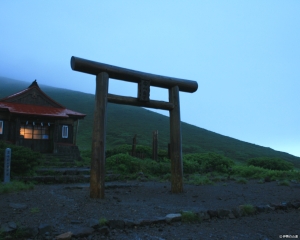 There is an associated shrine called Izougu（伊雑宮）, or to be exact “Izawa-no-miya”, near the ocean a litte far from Naiku（内宮） of Ise Grand Shrine（伊勢神宮）. The holy spirit called Amaterasuohomikami（天照太御神）, which looks like a sphere of light of a sun disc, still exists there.

When a big festival is held here annually, two large sharks come in the ocean near the shrine. People living in this region rarely see such large sharks in the near ocean. Local fishermen know the sharks, and it has been believed since a long, long time ago that in the year when two sharks are witnessed, the year turns out to be a bumper year. Fishermen watch them silently putting their hands together. The two “husband and wife” sharks stay in the shallow water for a couple of hours calmly and go offshore to disappear. Are they coming to present an offering for the festival? Or to get something from the mother god? This is a true story which has been handed down in Isobe-cho（磯辺町）of Ise region.

Deities that could have influence on the nature, or  Heaven and Earth have tendency to use animals when they want to manifest their will in the World of Reality. They never speak to a particular person directly nor make the person write down something automatically. The animals used by the deity are often a couple of male and female especially when the deity is in the high-level dimension. I’ve heard that in the animal world , when animals are husband and wife,  if one dies the other dies soon after.

As is often the case with the human beings, in any country that is so affluent and peaceful that the people forget life and death of the human beings, adultery and sexual immorality tend to spread. During Japan’s period of rapid economic growth after the war, people were busy trying to live, so there were less troubles of adultery and lethal damage cases than in recent years. In the world of gods, all the holy spirits sprang from the couple of Izanagi （イザナギ）and Izanami （イザナミ）, who were born from the Original God. They never adopted Polygamy. Here lies the answer.

Serving in a company,  I often hear about a man or a woman who is married but keeps committing adultery one after another. When I see such a person through my spiritual vision,

1. They often have a trauma between parent and child deep in their heart. Becoming an adult, they find peace of mind or a way to let off steam in the opposite sex trying to make up for the loss of love normally given by their parents or to release stress. They always seek for someone else unconsciously, being choosy about the partner. They are never satisfied unless they turn to their heart.

2. Some people who commit adultery are often possessed by spiritual beings. Also, there are cases that among ancestral spirits is a spirit who adheres to sexual desire and is unrelieved. Because of such a spirit, an offspring commits adultery unnoticed. In this case, by holding a memorial service for ancestors with gratitude, they will be able to stop committing the suxual immorlity.

3. Some people are under the influence of spiritual dirt attached by some spiritual being. New religious groups, especially the ones that call themselves Christian-related, are often the cause. Such religious groups are often from abroad. When I see their background through my spiritual vision, I sometimes see a  spiritual being which has a black body of half- bull and half-human and has a huge, black erect penis and tail. These groups have in fact strong influence on the real world in terms of money. If such spiritual dirt were attached to you, your marriage life would go wrong or an immoral relationship between a man and a woman would occur, and you would end up leading a miserable life.

In Japan too, if money-making religious groups have its spiritual being looking like a giant snake behind their back, they will become a hotbed of adultery and the believers will be made to collect money. If you practice memorial services for your ancestors with gratitude and always remind yourself of gratitude to God, you can avoid such adultery as could disrupt your marriage life.