Yeseterday, on December 30, I put my household shinto altar and Hassokudai（八足台）, a small low table used with it,  in the center of the Japanese style room and cleaned them up, which is an annual regular event of our family.

I had cleaned the body of the altar with a new dried towel and a tissue every year, but this time I did it with a wet towel soaked in salt water and wrung well after a long time of not doing so. The altar looked very refreshed and looked like a recycled one. What I thought cleaning up the altar was that the act itself of cleaning up was a sacred present to a holy spirit. So, it is not good to do it chatting or watching TV.

It’s close to the end of the year 2007. I have been able to know a lot of people since I started writing this blog on May this year by order from an holy spirit. I haven’t seen any reader in fact, but I think I met them spiritually.

The year of 2008 will be the time of the beginning of The Kingdom of God, when “the traditional vertical rock door will begin to open, fall down to lie and open up to infinity (∞),” that is, it will be the year of  humans beginning to realize their Inner God in themselves.

It occurs to my mind that the 20th year of the Heisei era（平成） is when 20（Huto) …Hutonorito（太祝詞）…Amaterasuohomikami（天照太御神） will get out of the rock door. And according to a revelation I got this morning at the end of the year, it is next year that the World of  Hakusan-shin（白山神）,uniting and ruling all gods, begins to move.

Hakusan-shin is not a single god but a manifestation of the Original Being that rules all gods on earth. Seeing a divine light pillar rising above the top of Mt.Hakusan, I can feel in it the original energy body which created all religions, including Taoism, Indian religions, Islam, and Christianity as well as Amaterasuohomikami and Susanoo（スサノオ）.

En no Gyoja admitted his complete defeat honestly, and on jumping onto the back of a fiend he went back to Mt. Katsuragisan（葛城山) . And later, Taicho Daishi was appointed by the government as the priest of the spiritual protection of the state without precedent.

Taicho Daishi saw in Hakusan-shin the Eleven-faced Kannon Bosatsu（十一面観世音菩薩）. It is not strange at all for him to see a Buddha in it because Hakusan-shin is the original energy body of all religions. This strong energy of Hakusan-shin is going to be projected onto the World of Reality. I’m looking forward to the next year. Thank you everyone for this year. 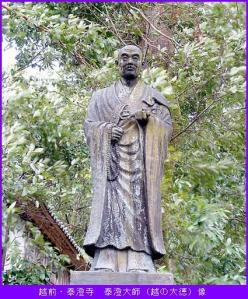