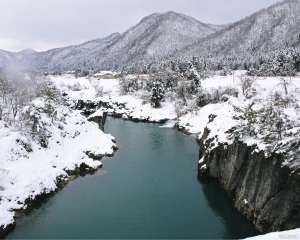 It takes you only a few minutes, which is enough, to hold a memorial service with gratitude for your ancestors and the spirits related to you. If you don’t do it everyday, it’s no problem. To do it a couple of times a week would be fine. In short, it is important not to forget the spiritual beings you can’t see and you don’t know. So, as long as its purpose is not to forget the deceased related to you and to direct your mind to them, the simpler the manners of holding a memorial service, the better.

When you hold a memorial service, it is the most important thing to just direct your mind to your ancestral spirits and the spirits related to you, but each group of traditional Buddhism has come to persist in the manners and has disputed over it among the groups. For them, the manners are more important than the true purpose of directing a heart to the deceased.

Therefore, as long as there is some manner to show your gratitude in the basis of the service, you don’t necessarily have to follow the manners of Ise Hakusan Dou. It is OK for you to make a change to it originally. Though I recommend you follow the manners of Ise Hakusan Dou which has no useless part by virtue of many years of my experience and is simple and the most effective to have influence on the spirit world, it is important for you to feel right according to your level of spirituality.

People are apt to assume that the memorial service which is held with time and money and appears difficult to practice is a good one that can have influence on ancestral spirits. Many people are satisfied just by setting up a grand ceremony of a memorial service with a lot of money.

Memorial services held by traditional religions lack the original purpose of devoting gratitude. It is most important for you to devote gratitude everyday so as not to forget the spirits who have something to do with you.

Spirits in pain and in trouble, forgotten, would try to inform those who are related to them of their being. And the living people, receiving this influence without knowing, would have various bad phenomena appear around them. But if you hold a memorial service for the deceased everyday directing your heart not to forget them before being affected by those spiritual influences, undesirable phenomena caused by such spirits won’t happen, because the spirits don’t have to remind you of their being anymore.

For example, suppose there is a mother who lost a baby boy, who died mortified,  and that she goes about taking care of the second baby and wishes the second child’s happiness forgetting the first baby. Unless you hold a memorial service for the forgotten baby, the baby will have been in anguish until he rests in peace. The size of a lost baby(Mizuko， 水子） is the same as a living human’s.

There is a possibility that the lost baby, watching over the family, will interfere with the relationship between his parents and their second child or his brother and sister in order that they pay attention to himself. A lost baby tends to be very jealous of his brothers especially. If you hold memorial services for your ancestors as a whole everyday, you can sublime such spiritual hinderance in advance.

You don’t have to worry about what kind of spirits are asking you for help, for frequently a different spirit who has something to do with you is coming close to you by turns. The memorial service with three incense sticks can make all of the related spirits rest in peace. Ancestral spirits who have already rested in peace will take care of the other wandering spirits. So you don’t have to worry.

The spirit who needs your memorial service the most will be taken care of first. Als0, if you want some spirit to rest in peace, the spirit will be taken care of preferentially. It is best to leave the things in the spirit world to the spirits. Memorial services with gratitude purify your spiritual body gradually and make it easier for your Inner God to appear on the surface. Then, you come to be in the state of Kannagara（カンナガラ）, a state of being with God, and you can feel a sense of security.