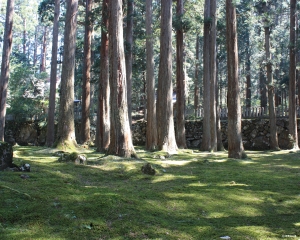 Seen from the earth, the North Star is in the center of the constellation. All of the stars which influence the earth move around the North Star. I feel the North Star, which doesn’t move among the others, is the star which gives birth to stars.

The second most influential star which has had a great effect on civilizations of the earth is Sirius, which is the brightest star seen from the earth. I feel it has influenced all of the civilizations for the past 6000 years.

From Egyptian civilization down, styles of building construction in Nara in Asuka period and the disposition of historic remains there reflect the position angle of Sirius in space.

The development of civilizations comes with conflict, joy, anger, grief, and pleasure and growth and decline, etc. The North Star seems to have assigned the Sirius shining in the night sky to rule and manage the earth spiritually so that civilizations would develop on the earth.

Now, the rule of Sirius is about to be over and we are entering the age the sun has a strong influence on the earth. Since Sirius is the brightest in the night sky, you can call it “the night sun”.

The age to come is the time of transition from the age of Sirius to that of the sun. To be sure, Sirius is shining so bright in the night sky, but the brightness of the sun is incomparable with it. A big spiritual change, which corresponds to the difference in brightness between Sirius and the sun, is going to happen in the World of Reality.

Mt. Fuji has been a symbol of the Japanese economic growth, but a mass of soil or rock on the mountain slope has been sliding down, which has become a real problem.

Spiritual symbols and practical problems are always linked up together. A true secret of Ise and Hakusan, which has been sealed up for the evolution of civilizations, will be paid attention to more and more from now on.

I hope that we live positively like the sun always cheerful so that we never feel guilty about anything. Something bright wouldn’t change if exposed to light. It would be brighter and brighter.

But, what if you are in the negative state of mind? Those who would feel good surrounded by something gloomy are also forced to go into the spiritually bright age. Whether or not you can accommodate yourself to the change and the sense of feeling different will be a problem.