There is a shinto ritual held in summer called Chinowa-kuguri. People pass through a large hoop made of kaya grass and bamboo several times, which is said to conjure evil spirits away and get rid of plagues and sins.

I feel this act of passing through a hoop means “death and rebirth.” Wondering what this event originated from, I tried a psychic reading. Then I found out that it was held after harvesting grain in the Agricultural Age of ancient times.

Originally people stayed silently for about 2 weeks in a hut made of kaya grass and bamboo to identify with God, which was done for the purpose of apologizing for killing creatures in the ground when producing crops, or capturing animals for food, and of expelling the impurities, as well as healing their fatigue. Here lies the origin of “ablution and purification” of Shinto.

As time progressed, people came to have difficulty staying for as long as 2 weeks in the hut, and it came to be replaced with the simple ritual of Chinowa-kuguri, which has remained to this day. Human beings seem to have expel impurities since ancient times by having a feeling of identification with God when they hold an event of “staying inside” once a year.

I hear that cells composing human bodies repeat death and rebirth everyday. Cancer cells arise every day even in a healthy body, and immune cells fights against them day after day.

When the number of cancer cells exceeds that of immune cells for a while, carcinomatous lesions begin to form. Your feelings influence the subtle balance between malignant and benign cells. Cursing others, being full of dissatisfaction, being selfish, or always worrying without gratitude―they all cause cancer cells to increase. It is gratitude for being kept alive that causes immune cells to increase.

Everyone of us has both cancer and immune cells. People make mistakes and commit sins in life. Everyone has two aspects of sins and good. If you committed irreparable sins in the past, you have only to do as many good deeds as you can not forgetting the sins. We should live in such a way that we do more good deeds than sins. It is those who feel their sins that have a good chance to be saved. (the idea of “Akunin Shoki” that those who can feel their own sins can reflect upon himself, improve himself and mend his ways)

You can have the same effect as Chinowa-Kuguri by repeating the following words; 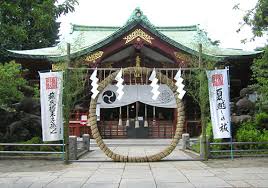 ※ To read past articles of this blog, see the following website, a revised edition of this blog, whose article is supposed to be published almost everyday.