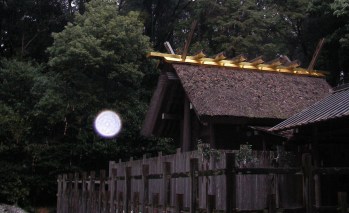 According to Nihon-Shoki, the oldest chronicles of Japan, the first time Amaterasu-oho-mi-kami（天照太御神）reached Ise（伊勢）, carried on the back of Yamato-hime-no-mikoto（倭姫命）, or the Imperial princess, Amaterasu-oho-mi-kami said to her “This place where the wind is blowing from the ocean is where the wind from Tokoyo（常世）, the floating island which used to be on the ocean long, long time ago,  still keeps on beating like waves do. I want to stay here because I can immerse myself in the beautiful memories with Kunitokotachi-oh-kami（国常立太神）.” Amaterasu-oho-mi-kami and Kunitokotachi-oh-kami are also positive and negative energy of the world like a wife and a husband.

A columnar joint stone pillar, which was formed by lava getting cold and hard at Mt.Hakusan（白山） in the stage of creation of the earth, was carried to the floating island（This was a huge island floating on kelp in the sea and it was made of accumulated bird dropping. Since it was a floating island there’s no trace any more. It is also called “Mu”） and became the stone for Yorishiro（依り代, a medium for spiritual bodies to stay at temporarily）for the worship of the sun, where the sun god(=Amaterasu-oho-mi-kami) was worshipped.

It seems that peaceful, paradisal years continued for a long time, when Kunitokotachi-oh-kami had direct effects on the World of Reality. But it remained so paradisiacal that human beings couldn’t change and evolve.

In later ages, the stone pillar was carried to the place where the present Izougu（伊雑宮）, which is an associated shrine of Naiku（内宮） of  Ise Grand Shrine（伊勢神宮）and whose official name is Izawa-no-miya, is located and buried under the ground of the forest behind the main building, I feel. The holy energy of Kunitokotachi-oh-kami has existed at Geku（外宮） of Ise Grand Shrine.

And about 2000 years ago, in recent years, Amaterasu-oho-mi-kami, because of the karma of the time immemorial, made the princess visit Mt. Mira（三輪山）in Nara（奈良） and some places around Kyoto（京都） so that spiritual barriers could be formed and went back to Ise where it should be and has resided there ever since.

Though the present world is tough to live in, it is the best environment to improve your soul by leaps and bounds. People may be fortunate who can go through ordeals in this country with ancient contrivances of God. I hope we will get over them positively.