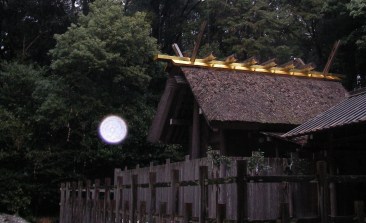 Mr.A, who appeared in a past article of this blog and had a patent of drug, was sickly and handicapped from birth and had a disability certificate. Because his physical body was weak, his spiritual body was playing a much more important role, even in Showa era, and his physical body was like an attachment. While waking down a street, he would often sympathize with too many spiritual beings that wanted to say something.

In general, spiritualistic mediums like him are apt to be mentally ill and enter hospital because of it, but since he had Inner God of Kunitokotachi-oo-kami（国常立太神）in his heart, he was successful socially and spiritually. He told me one day that he made the scientific discovery thanks to a revelation from the World of Gods. He obtained the patent after he graduated from the pharmaceutical department of a certain national university.

I have never seen a man like him, who can sympathize with various kinds of spiritual beings, ranging from spirits of lower dimensions to ones of higher dimensions, which was due to the weakness of his body. Some psychics are famous as a medium, but most of them are just possessed with fox spirits, and they’re in danger. Such mediums are often mentally unstable and will have to see a psychiatrist sooner or later. Mediums whose heart gets occupied by other characters are unstable and useless. Mr. A, who had his own company, was no exception.

According to Mr. A, he had often sympathized with Fishimi-inari-shin（伏見稲荷神）and Kou-jin（荒神） just until he met me. After he began to sympathize with Kunitokotachi-oo-kami, he was introduced to met by a certain man. While he was with me, he was possessed suddenly by a spiritual being who called itself Kunitokotachi-oo-kami, and he began to tell me its revelation. The content of the revelation was a total denial of all existing religions that collected money from their believers and a warning and a sentence to the modern society that had developed confining the God of Creation.

In recent years, a lot of people make predictions about the end of the world or advocate the transition to a new, next dimension. What you have to be careful of is whether or not you long for the end or demise of the world unconsciously because you’re thinking you’re unfortunate in this world or you’re frustrated with something you can do nothing about. If you were so, you would be attracted to or interested in catastrophic revelations.

As for Mr.A, he must have had an uncontrollable inferiority complex and dissatisfaction towards his physical body all the more because he was rich and lived a comfortable life. For example, there is a famous book named Mitsuki Shinji（日月神示）, on which many recent prophecies of the end of the world are based. And during the days of misfortune, its author began to write the book automatically with his body possessed with a certain spirit. But in later years, when he became rich enough to go overseas, he stopped writing it.

The key for all lies in this World of Reality. All dimensions, from the World of Hell to the World of Gods, are coming to this World of Reality to become one. It is the mind of dissatisfaction of trying to escape from this world that attracts things that destroy you and consume you. So you have to be careful about what you’re thinking because what is similar is beginning to attract each other. Conversely, the time is to come when to those who are true to their own conscience, this world will be like heaven.