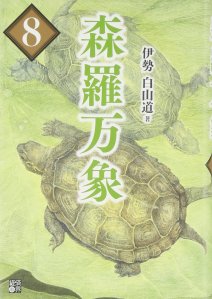 With Setsubun-day, February 3, drawing near, I remember an incident that happened about this time last year, when I almost finished the proofreading of my first book entitled the Way to Inner God.

Everything was going well at first and spiritual problems didn’t happen. But a few months later, when I  almost finished all the work, it happened. I was looking over the manuscript a week before Setsubun-day, thinking about when to submit it to the publisher. Then, I perceived a spiritual being touch the spiritual barrier covering my house.

Since then, spiritual beings from the World of the Dead began to try to break the barrier, only to disappear spluttering, like an insect flying into an insect trap. It was clear that evil spirits really hated my book to be published because no evil spirits had been able to touch the spiritual barrier before.

I was used to this kind of attack since I began to get rid of running-away Kenzoku-shins about twenty years ago, so I thought that the evil spirits would be destroyed by my Kenzoku-shin, but this time they never gave up easily. My book may have been a book that a certain evil deity wanted to prevent from being published by all means. They tried to break the spiritual barrier over and over every night when I was sleeping.

The wether was so stormy on the day I left the manuscript at a delivery company that I couldn’t see anything what with sudden hailstones, what with snowstorm. I met a fierce resistance from evil spirits persistently. However, as soon as I sent the manuscript to the publisher after Setsubun-day, they stopped attacking. I remember that the sunset was very beautiful on the day. Some agreement seemed to have been reached in another dimension.

Every time I open this book, I feel like reading it over again. It has such a strange magnetism that I hear shouts of gods hidden for many centuries.

On Setsubun day, Japanese people throw roasted beans, which custom is a kind of incantation to prevent hidden gods who were made bad ones from reviving. As the earth has been gaining its spiritual frequency, all plants, trees, rocks and living things have also begun to gain their spiritual frequencies. When their spiritual frequencies become higher, you will be able to hear the frictional sounds of molecules that make up their bodies. Plants, flowers, trees and rocks will begin to “chat” as they used to in the super ancient times.

The molecules of roasted beans might begin to revive and germinate because of the high spiritual vibration. This book seems to have begun to chat a little sooner.