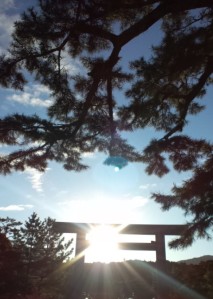 I was driving to work this morning. It was a fine day. When I felt something was a little bit strange, I saw a kind of belt of light from under the ground illuminating pedestrians up and down like scanning, as if it were examining the people. During the daytime, the light scanned me, too.

The light came from under the ground, not from the above. It seemed as if it checked up a soul history and a way of thinking of each of the people.  I felt as if it had said “I’ll be back.” And then a vision of the ancient Mt.Hakusan occurred to me.

I saw in my vision that there used to be a ceremony site functioning as the spiritual center of Japan, where Amenominakanonusihinokami（天之御中主神）, the supreme deity in the World of Gods, was worshiped. I think it was about more than 20000 years ago. Two stone pillars were located in the front and one in the back. Both ends of a rope weaved with barks were tied to the two stone pillars, and the most important pillar was located in the back. Seeing in the direction of the Sea of Japan from the place, Noto Peninsula looked much bigger than the present time, and I felt it to be very close to Mainland China and Korea.

An incarnate spirit who was the priest of the ceremony site and inhabitants of the Hakusan dynasty, getting wise to an assault of a different race beforehand, escaped to Shambala,a visionary underground megalopolis, through a different-dimension tunnel under Mt. Hakusan.

Because of an earthquake which occurred in the 19 year of the Heisei era,  Japanese archipelago itself being a physical body of God,  blood has begun to flow between Ise and Hakusan, the place of which is a vital artery of Japan. When the blood begins to spread all over Japan gradually, Kokuso Kunitokotachi Ohkami（国祖国常立神）, the Earth God, will wake up and begin to move.

Presumably, the inhabitants of Shambala are looking for people who deserve to ride on the back of the dragon body of Kokuso Kunitokotachi Ohkami. I felt they were looking for those who can realize the importance of the things that are taken for granted, and be grateful for that.

If you want to put a household shrine altar in your house,  you had better vist a shrine on behalf of your family, buy Ohuda（御札）, a kind of talisman, and put it up in the altar. Because of this deed, a spiritual line is made between the shrine and your house.  You had better not ask someone else to buy Ohuda instead of you. This is meaningless.

People who can’t afford to visit Ise may should get Ohuda at the supreme shrine in the region you live in, or at your favorite shrine near your house. When you have a chance to visit Ise, you can get Ohuda there and put it up in the altar together with the existing Ohuda. Jingu-taima（神宮大麻）, a talisman of Grand Shrine of Ise, are sold at supreme shrines all over Japan. This is OK too. Your home gets connected first with the supreme shrine in your region and then the Grand Shrine of Ise.

By the way, why do you set up the altar in your home and try to worship? I’m sure you are expecting some protection or something good will happen to you. But, this kind of thinking doesn’t cause the righteous gods to work for you. The fact is your intention to try to help God causes them to move. Most people try to put their own altar at home from the wrong motivation.

The problem is these Kenzoku have their own traits in accordance with each form and are all inflexible. They place absolute trust on their superior beings, because they know that their life forces come from the superior. So, if their superiors or sacred being existing in shrines are made dirty or thought light of, something dreadful happens. It is Kenzoku that punish people for what they did. The righteous gods cannot interfere in the World of Reality, so they cannot punish people, either.

Kenzoku’s punishment is harsh. They care less about humans’ lives, for they have interfered in the human society for ages and watched over humans. It is true that they have done something too good in favor of those who magnify the superior beings. Kenzoku which respect their superior beings belong to the World of the Righteous Gods, while Dassou Kenzoku（脱走眷属）, runaway Kenzoku, mistake praises from humans for ones toward themselves, and imitate their superior beings. In Showa era, runaway Kenzoku founded many new cults.

In this Heisei period, as the World of the Dead has diminished, so has the number of Kenzoku rapidly. The time has come when the righteous gods can interfere in this world directly. That is, the time has arrived when we humans can merge with the indwelling God without the agent of “errand Kenzoku” in between humans and gods. The new age has already begun.

Using the power of clairvoyance, I tried seeing where three stone pillars went away, which used to be at an altar and worshiped on top of the Hakusan（白山）in the ancient times.

Before some other race attacked Hakusan, part of the residents who were trusted with the sacred stone pillars by priests took the main stone pillar and another and run away with them to Watarai（度会） region and Isobe（磯辺） area , except those who escaped to Shambhala, a legendary country said to be located underground. The other residents escaped and spread all over Japan.

The main stone pillar has been varied as a holy pillar at the center of new site of Gekuu（外宮）of the Grand Shrine of Ise, where the next main shrine is to be built in 2013. The other stone pillar was carried from Ise to Mu and worshiped there as Yorishiro（寄代）, an object sacred gods or spirits come and possess, of Sun God. Before Mu went underwater, the priests carried it to the present Isobecho（磯辺町）in Ise and has been worshiped at Izougu（伊雑宮）, an associated shrine of the Grand Shrine of Ise. Some residents of Isobecho are descendants of the people of Mu.

When I was viewing these images, my consciousness jumped to the Isobecho in the 20th century abruptly and saw a man. He seems to be an obscure Shintoist, who has been dead. This man seems to have been an avatar sent from the World of Gods. A soul of the level 9 high in rank in the World of  Fierce God （鬼神界）belonging to the World of Gods (正神界), whose soul was associated with Susano（スサノオ）, seems to have been incarnated as the man. The soul was so high in rank that it must have been difficult to take on the human body.

The man saved Japan many times from national disasters from behind the scene. Thanks to this avatar’s effects, Imperial court was sustained without being broken down after the World WarⅡ. This wan was endowed with a spiritual, sacred sword from the World of Gods. He was carrying out his mission with this spiritual treasure sword of fighting against wicked spirits in order to protect Japan. By the way, the third stone pillar which used to be in Hakusan was taken away by the different race to Hakusantou（白山頭）,located on a border between China and North Korea.

Well, there seems to be a man who has taken over the sacred sword in a different region in Japan. I wonder where he is.

When I visited Gekuu（外宮）of the Grand Shrine of Ise（伊勢神宮） in May in the year 19 of the Heisei era (2007), I saw a holy shining pillar stand there to be sure, but its shape was blurred. When I asked my companion if he could see the shining pillar, he said he couldn’t see such pillar but a certain spot felt especially bright. This was exactly where I saw the shining pillar with a faint outline.

When I visited there again three years ago, around 11 am, three pillars were standing whose color was champagne gold. I think almost everyone could feel or see it. And also it has something to do with the time you visit. Between 10 am and 2 pm is the time you can see them relatively easily. But, though I can see both the North Star and the Big Dipper at Gekuu with the power of clairvoyance, to do this calls for transcendental power as a medium.

I can see strings of genes which produce lives moving spirally in the shining pillar, which is a kind of light tunnel connecting the World of Gods with the World of Reality.The place where the source of all creature’s lives descends exists in both Ise（伊勢） and Hakusan（白山）.